One of the first junior football teams in Scotland was Brotherton Rangers, who played at Johnshaven.

They were known in their early years as the ’Jeely Jar Rangers’ as they collected jelly jars at one penny a time to raise the funding for their first team strip. In 1897, about the time the photo at the top was taken, there was a disruption at the club. Several players and officials broke away and formed Johnshaven Dauntless.

The Rangers went defunct a few years later, but Dauntless have carried on since, breaking only for two world wars. The club now plays in the Fettercairn & District Summer AFL. 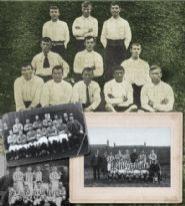 Johnshaven Athletic (2008). Visit their website for team details and all fixtures

Other Johnshaven Dauntless team photos are from early part of 20th Century.

(Follow this link to buy the book about The Dauntless!)