As visitors cross the bridge over the Castle Burn on their way into the Kirkton, the first thing they see immediately to the right is “Denview”: through a haze of nostalgia, Benholmites, of a certain vintage it must be said, see the Benholm Hall.

Beginning in the spring of 1925, when a committee was formed and a hall fund established, it was 10 years before the required £700 was raised to build the hall. Nine years is a long time to raise money and it was hardly surprising that during that time the committee was not without its troubles, several members leaving the district, waning enthusiasm and, of course, the cynics who said that a hall would never be built. 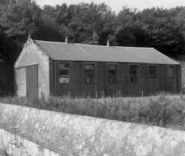 But built it was and on Saturday, 3 November 1934 Mrs Rust of Benholm Castle performed the opening ceremony.

Described at the time as “the finest village hall in Scotland”, the main hall had a seating capacity of 260, partially fitted out with plush seats which were very luxurious for the times. Behind the stage were two changing rooms which could be converted into a comfortable meeting room, while adjacent was the kitchen and the building was equipped with the latest lighting system - Tilley lamps.

Enthusiasm, naturally, was now high and the hall initially prospered but the timing of its birth was unfortunate and its lifetime short. With a large and still thriving farming community, its own Post Office, church and school, the hamlet of Benholm was able to sustain a social existence independent of Johnshaven and, before 1934, it was the school which was its focal point, the regular meeting place of the local WRI and Woman’s Guild, and the indoor venue for concerts, dances, whist drives and meetings.

However, given the limited size of the school and the inconvenience of getting it back into order after a function and ready for lessons to begin again, it was not surprising that there was a demand for larger premises. And for a short time the herculean effort involved in raising the money was justified by the extensive use made of the hall. The existing organisations moved there as did the Farm Servants’ Union and a Men’s Social Club was formed. The management committee themselves organised events and on 17 March, 1939 the Garvock and Benholm Dramatic Clubs drew the second largest turnout since the opening of the hall and it was followed in July by a well-supported treasure hunt.

Only a few months later, though, the Second World War broke out and no events took place in the hall as long as it lasted. Things looked promising for the hall on the conclusion of hostilities. Although the Men’s Social Club was not revived, the Guild and WRI were and they were joined in 1947 by the Benholm Junior Agricultural Club, while many of the previously popular activities such as whist drives, dramatic evenings, concerts and dances returned. However, the renewed optimism was short lived.

The drift from the land, which had been well under way long before the war, increased apace as mechanisation replaced manpower and by 1957 all the regular bookings had ceased although the dances continued for a year or two longer. Ah! The Benholm Hall dances. From the late 40s and throughout the 50s the hall committee themselves held mid - summer and Harvest Home dances while other organisations and individuals also held dances. Attracting patrons from far beyond the confines of Benholm, they were sociable and lively affairs with a heady mix of modern and old time dancing and belonged to a more innocent, but not unworldly, age largely unknown to the youngsters of today.

Many a romance began on the floor of the Benholm Hall to the music of Ian Gauld, Fred Carnie, Bill Campbell or Jack Sinclair, blossomed on the walk home to Johnshaven and culminated at the altar.

The hall did receive a boost in 1963 when a badminton club was formed and it was very popular until it too folded in 1968. After that the hall, a proud testament to a vibrant rural spirit, but a victim of social and economic change, served no useful purpose and, after two years without lets and much soul searching by the committee and trustees and, following a public meeting in July 1970, it was sold to Mr Stewart Murray in December 1971 for £335.

Of this sum £300 was donated to the Benholm ad Johnshaven Congregational Board on the conditionn that it be used for the upkeep of Benholm Church and manse. The remaining £35 was gifted to the Johnshaven Village Hall committee. It was later purchased by Mr Gordon Leith as a garage and its final use was as a base for restoring heritage cars.