Left with a large family when her husband Roy died young, a typical days work was to walk from Johnshaven, over the Garvock Hill to Montrose and back with a heavily laden creel on her tired shoulders. A highly intelligent woman, her life was one of unremitting toil and her only luxury was her beloved library books.

The Betty Sloch (the shore landing channel opposite the Old Home Guard on Fore Street) was named in her honour. She spent her life in a cottage overlooking it.

Sea Pie, a traditional dish more recently stolen by East Anglian heritage resources, would have been cooked for the crew of a fishing boat...why not try making it today! 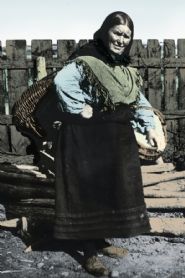 Fry the diced onion in the butter until soft in a large pot. Add the steak with salt and pepper to taste. Totally cover with boiling water and gravy browning, add the stock cube. Boil for one and a half hours along with the potatoes.

About 20 minutes before serving, add the doughballs. To make these, mix the ingredients with water to form a soft dough, roll in flour and place in the pot (to cook for the final 20 mins).

In some villages, such as Ferryden (just across the bridge going south out of Montrose), the dough was laid in the pot on top of the stew as one large flat pancake. Delicious!

Sea Pie (or Sea Pudding) was well known throughout the fishing villages and towns of Scotland and England. The fishermen of Lowestoft were especially fond of the dish, renaming the dish a slightly less glamorous ’Puds’. (pronounced pouerdz)